We hate to admit it, but Spannerman is actually a pretty wise old beast when it comes to motorbike maintenance. He’s just not so good at life advice, but that doesn’t stop him. Let’s check out some more of his incredible work over the years…

I want to throw my 20 cents worth into the debate about transport accident commission compensation for motorcyclists. How come it doesn’t seem to apply to cars?

The crazy thing is, though, even after the hype about the Victorian anti-motorcycle ads, you’d think riders would get the message about protective riding gear.

I see many riders in expensive leather jackets coupled with shorts and runners. I suppose it’s good that at least they’re wearing the jacket.

As you travel north in Australia, as I did last week, it gets worse. It seems quite normal for riders in Queensland to just wear shorts and a t-shirt.

This applies to Australia Post as well. I would have thought in these days of occupational health and safety policies that posties would be required to wear full protective riding gear.

How is it that the posties in my area can get away with just wearing stubbies? Even if they’re not scared of gravel rash, what about skin cancer?

This will be about the suggestion that there should be some tie-up between what riders were wearing at the time of the crash and how they will be covered by insurance.

I couldn’t agree with you more, Luke, and sane crash researchers will be on our side as well. It can’t happen just to riders and the variables are too great to apply it to four-wheelers.

Regarding protective riding gear, you’ll notice if you look at INFO MOTO road tests that the staff are all well kitted.

We do it to set a good example but we also do it because it can be goddamn cold in Melbourne where most of the testing takes place. Protective clothing suits the climate here.

Some years ago, Snag and I did a run to Cairns on big cruisers. Mostly I just added to the bar bill at night and ate my own bodyweight in fresh seafood every time we passed a fish co-op.

We spent a few days in Cairns in 45-degree-plus heat and I saw the same thing you did. It was clear, though, that riding in full leathers in that climate was completely impractical and arguably impossible. Heat stress would finish you off long before you achieved your destination.

I spent a bit of time thinking about suitable riding gear in the tropics without coming to any definitive conclusions.

One thing I can’t recommend highly enough, though, are mesh jackets. I currently use a DriRider Climate Control jacket and, with the quilt and rain-proof liner removed, the armour remains but you get airflow that feels like you’re riding naked. (Memo to DriRider – it’s starting to fade and my size is 60/50 4XL).

Pants? They should be full length but even jeans are too hot in the tropics. Anyone out there with any ideas?

Don’t be too hard on our northern brothers, Luke – it really is bloody hot up there.

G’day, mate. I got my first bike in 1981 (Suzuki Katana 750). In 1988 I started my motorcycle apprenticeship. Today I’m still riding an ’81 Katana but the difference is I’m now qualified and have more than many years of mechanical experience.

Charging problems on CBs or GSXs? No problem. Electrics or carburettor tuning – a walk in the park.

I’m a one-man registered company and I charge $50 an hour for labour. You do a great job and I try to as well.

Dedicated readers will remember I broke my own rules recently regarding recommending motorcycle workshops.

Nice to hear from you, Rick. Using my incredible powers of deduction, you are currently ‘old’ years-of-age and, yes, you did live through the golden era.

I bought a Kawasaki Zephyr 750 recently in beautiful condition with only 10,700km on the clock.

Right from the moment I picked it up the cam chain rattled when the engine is started from cold. The noise seems to fade away as the engine warms up.

I took the bike back to the dealer who sold it to me and he said it’s common with this model and not to worry about it.

Can you give me a second opinion? It’s a lovely bike and feels like new to ride – it’s otherwise in the best condition for a bike this age I’ve ever seen.

It’s hard to imagine serious cam chain wear at just 10,700km, Wayne. If the bike looks good, it’s an indication the previous owner looked after it.

The Zephyr 750 was a noisy engine and it’s possible what you’re listening to is normal mechanical noise that goes a bit quieter when hot oil is circulating in the engine.

The noise could have something to do with the fact that the engine has clearly been sitting unused for long periods – it sounds to me like it would enjoy a run to Albany and back.

The cam chain tensioner on the Zephyr was a wedge-type affair common to a number of Kawasakis from the period (mid ’90s). It’s essentially non-adjustable and not the pinnacle of Kawasaki design excellence.

Replacement manual tensioners can still be purchased if the noise continues to drive you crazy.

I recently bought a 1974 Honda CB360 from the US. No need for you to tell me how hard it is to get parts for them in Australia and that freight from America is a killer – I’ve learned this the hard way.

The engine has decent compression though it could do with a little more on the right cylinder (although it’s still within the recommended specifications).

When the engine starts it runs fine and sounds strong. After two or three minutes of warm-up it begins to sound like it’s misfiring on the right cylinder and spitting fuel back out through the carbs.

Before pulling the engine apart, I was hoping to get some idea on what could be wrong. I have checked the valve clearances and they’re fine, and I’ve also replaced the points, leads, caps and spark plugs.

Could the lower compression on the right side be an issue?

Could it be a valve issue due to the build-up of gunk on the cylinder head?

Don’t pull the engine apart, Fat Tony, as the problem is unlikely to be mechanical. The engine only has to run well for a short time to tell you that it’s basically okay.

You’ve done most of the obvious things so step one is to replace the condenser. This is a small cylinder attached to the points and will only set you back a few bucks.

No improvement? Have the coils checked (a car place will do it) to see that they’re not breaking down under load.

If you ride off after you’ve started the bike, does the problem occur or does it only occur if you watch the engine while it’s idling?

The problem is highly unlikely to be related to either slightly low compression or carbon build-up in the combustion chamber but it could be carburettor-based. Clean them, check the float heights and make sure the floats actually float.

Above all, don’t panic. Rocket science the CB360 ain’t. It only had about 15 moving parts and we’ll solve the problem. Stay in touch.

Wanna ask Spannerman a question? Of course you do. Email us with ‘Spanner Question’ in the subject line at: admin@infomoto.com.au

Motorcycles of war: The military bikes built for battle

Fabulous from the great man. Does he do marital advice?? 🤔

OK, re Wayne and Fat Tony’s questions and Spannerman’s comments involving warming-up an engine before you take off, let me rekindle this age-old question: Is it really necessary? I’ve been annoyed more than often by rally-goers warming up their engines for ten minutes beside my tent while they faff around doing god knows what. Just take off, will you?

Back in the ’70s, ’80s when I used to contribute to a bike magazine in Holland before moving to Australia, this was a hot topic. The consensus seemed to be to get going gently on the choke and to increase the revs as you eased off the choke. This also helped to warm up the oil in the separate geaboxes in BMWs, Guzzis and pre-unit Brit bikes.

I’ve heard later experts say that the pre-ride warm-up helps to marry the different castings of piston barrels to their cylinder heads, but why do you have to do it at standstill? OK, a former Ford technician explained that Germans would take off in their cars and hit 160km/h straight onto the Autobahn. I get why that might not help. But 10 minutes with a loud exhaust on a campsite off secondary roads? Puh-lease! 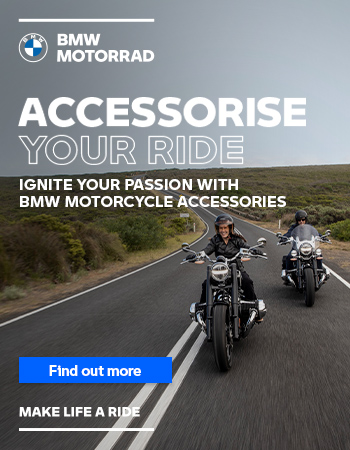